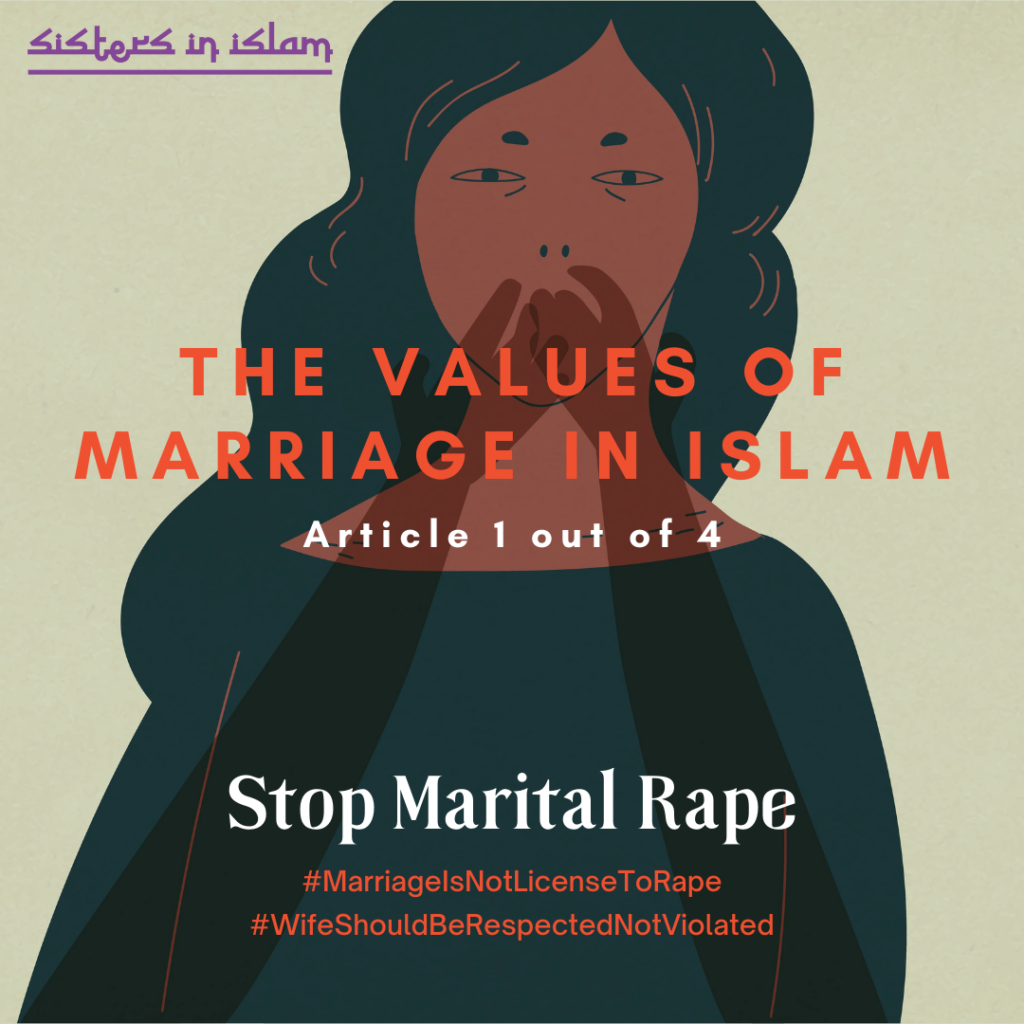 The Values of Marriage in Islam

The concept of marriage that is proclaimed in our society needs to be corrected and seen based on the values ​​in a marriage that are recommended by Islam. Matrimony or marriage in Islam (Surah Al-Nisa, 4:21) is referred to as a supreme or firm covenant (mitsaqan ghalidza).

This covenant must be based on mutual agreement, and it is enshrined with solemnisation, where the scholars of jurisprudence believe that the marriage contract is ibahah, which means that marriage is a grant of permission and not ownership. The granting of permission is not only owned by one party but must come from both parties. The rights allowed in this marriage also do not mean ownership of its rights and benefits. The rights and benefits of those rights still belong to the owner and do not automatically pass to the person who has been granted this permission. Thus, the benefits and rights can only be given when permission is requested from the person. Some scholars of jurisprudence think that nothing can be done to the owner of the body without her/his permission. In fact, it can be seen in the fatwa issued by Dar Al Ifta, Egypt not so long ago banned marital rape.

It is very suspicious and worrying when there are people in our society who try to deny the element of permission or consent after entering the realm of marriage. This patriarchal ideology causes harm to women, as wives tend to be victims of domestic violence which includes sexual violence, and not to mention that this ideology denies the experience and inflict trauma to wives who experience sexual violence in marriage.

Marriage in Islam does not place one party more entitled or more powerful over the other. A marriage is a cooperation between husband and wife and not something that can be considered as a transaction, contract or barter system. After reaching a consensus in any discussion or decision, only then it is followed by the granting of permission, including to have sexual intercourse. In (the book) I’anatu Ath-Tholibin, Al ‘Allamah Abu Bakr Uthman Al Bakri says that marriage is the ability to have sexual intercourse, not the absolute ownership of its rights and benefits. Thus, the wife’s body is not the husband’s absolute right in marriage.

Marriage is not just about legalizing sex

The ability or consent to have sexual intercourse in this marital relationship is often misunderstood. Marriage is not to legalize sexual intercourse alone, and Islam is not only halal and haram. Islam describes in great detail the purpose of marriage in Surah Ar-Rum, Verse 21 which states that the couple was created to give each other and obtain a life of sakinah (peace), mawaddah (love) and rahmah (affection). These three values ​​are synonymous with marriage but their understanding and application are not as expected. If sexual intercourse between husband and wife does not bring peace, affection and love, and, if the sexual intercourse is performed without taking into account the consent of the wife, does Islam still allow it on the basis of authority or ‘rights’ of the husband?

The view that affirms this oblique principle, it seems to place Islam as a religion that does not care about the dignity of women and puts authority before the safety of a women’s soul. Commitment in marriage is for the sake of mutual well-being and not to satisfy the needs of one party only. To emphasize, the view that carries the narrative that it is the wife’s responsibility as a sex servant to the husband tends to put wives in acts of violence and cruelty including sexual violence and/or marital rape.

Husband is not Wife’s God or Master

In addition, in Surah An-Nisa, 4:19, emphasizes good attitude and relationship (mu’asyarah bil ma’ruf) in marriage. Hence, husband and wife should not hurt each other, should appreciate and respect each other. These values ​​need to be present from both parties in the marriage. As mentioned in Surah Al-Baqarah, 2:187 “Hunna libasun lahun wa antum libasun lahunna”, which means “They are your clothing, and you are their clothing” explains that the relationship and treatments between the husband and wife should mutually bring happiness and harmony. The parties should stand on equal ground. Marriage does not allow the wife to be considered as a sex object, a subordinate or a servant of the husband.

Lastly, is the value of contentment in marriage. It is often emphasized that in our society, it is the responsibility of the wife to pursue the pleasure of the husband throughout the marriage, no matter in any affair, the pleasure of the husband is obligatory. What is taught to women or wives, is not the value of contentment (accepting each other with an open heart), but rather submission. It is also taught that any decisions and actions from the husband, the wife should be ‘contented’ and just surrender and accept such acts. Society often forgets that Islam actually advocates the concept of husband and wife seeking the approval of Allah and the approval of each other. The approval of God is also often equated in value with the pleasure of the husband. It is as if, that if the husband is pleased, then God would also be pleased. If violence and coercion are used in a marital relationship, is it arbitrary for us to say that God is pleased with his servant and such treatment?