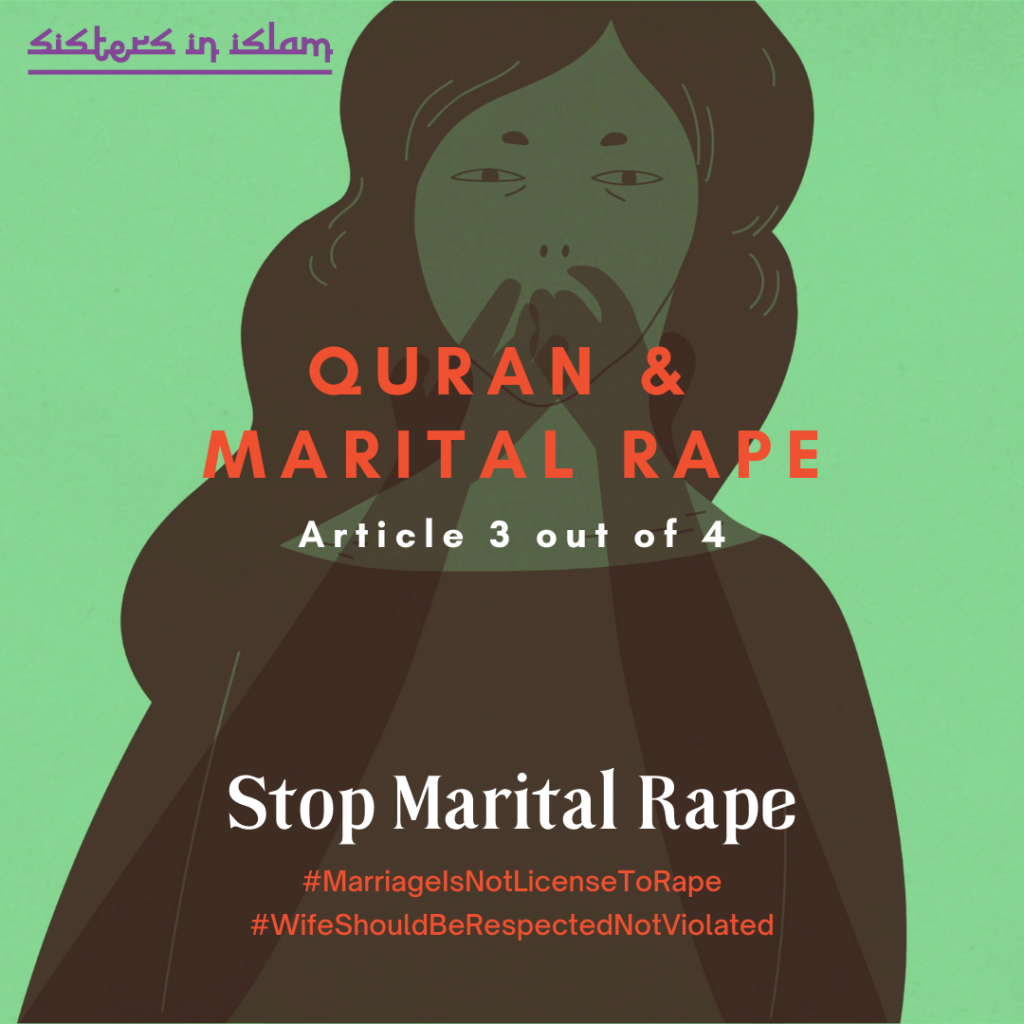 Marriage does not allow for violence and coercion

The solemnisation in Islam only allows sexual intercourse which was initially forbidden. After the solemnisation, sexual intercourse becomes a mutual right between the husband and wife, not solely of the husband alone. Solemnisation does not legalize coercion, violence, and degrading and painful acts, either to men or women. All wicked and evil acts, inside or outside of marriage, remain forbidden. The principle of “Laa dharara wa laa dhiraar” or “shall not harm others and be harmed by others” must be held firmly in any matter, especially when it involves the relationship between husband and wife.

It is revolting when some Muslims state that Islam condones marital rape by justifying it as the  ‘husband’s right over his wife’ or ‘wife’s responsibility to serve her husband’. Women and wives are told to enjoy the pain of being raped and abused. It is very unfortunate that many men assume sexual intercourse performed forcibly and involuntarily does not hurt and injure the wife, when in fact it deeply hurts the wife in many aspects.

Islam teaches strict respect for every human being., especially to women. Islam also forbids injustice to anyone. If an action hurts the wife, it automatically violates the principles of humanity that have been taught by Islam. This is due to the fact that, under Islamic principles, we are encouraged not to injure ourselves, as well as other human beings.. This principle is found in the hadith of the Prophet saw “Do not hurt yourself or hurt others” (Muwatta ‘Malik).

Sexual relations in a marriage that are done by mutual love and mutual enjoyment are indeed halal, because it is in line with the teachings of the Qur’an and the example of the Prophet Muhammad SAW. However, when sexual relations are performed by coercion and violence, it is haram. Sexual intercourse carried out in a coercive and violent manner, does not conform to the principles of Islamic Shari’ah in the Qur’an and the ways set by the example of Prophet Muhammad SAW. In fiqh, coercion and extortion are unacceptable acts, let alone coercion in a forceful and violent manner. Because of the harm, the relationship becomes forbidden and should be eliminated or abandoned. The method of fiqh states: every harm must be removed (adh-dhararu yuzal) ”.

Wives need to be respected and not violated

The value of mutual kindness is emphasized in every aspect of the life of a husband and wife, including sexual relations between husband and wife. If the wife is required to pay attention to and serve the husband’s sexual desires driven by his testosterone hormone, then the husband is also required to ensure that the wife feels at ease and happy with the sexual relationship between the two of them. Husbands should empathize and take into consideration the state of the wife, who has moments of fatigue and no mood, emotions may fluctuate due to hormonal changes during certain phases like ovulation and menstruation, or discomfort and pain during pregnancy and after childbirth and so on. Focusing on the lust for self-satisfaction over the wife’s pain and discomfort is actually against the demands of the Quran and the message of the Prophet SAW in serving the wife and fulfilling her rights.

Kindness between a husband and a wife is manifested by the act of obtaining consent pertaining to any matter that belongs to them which includes their respective bodies. Many think that solemnisation signifies ownership of the wife’s body to the husband and vice versa. This is a false assumption because solemnisation merely allows sexual intercourse between the two, and does not signify ownership of own their bodies to their respective spouses. A person’s body remains under the ownership of the owner of the body and any act that is to be imposed on her/his body must have the permission and consent without any threats or intimidation towards the owner of the body.

Even in taking the belongings of the wife and husband, permission needs to be obtained,  let alone a living body with emotions and intellect that can feel and evaluate. Forcing a wife to have sexual intercourse is a transgression and an act that disrespects the body, mind and emotions of the wife. sexual relationships of one-sided nature should not be taken lightly, let alone with elements of coercion and violence because it has a tremendous impact on the dignity of the wife and her mental and emotional state. In many cases, such acts may also result in physical injuries. Thus, this heinous act deserves to be called rape because it violates the limits of the wife’s autonomy on her own body and has traumatic and negative implications, even in a relationship that is halal to have sex.