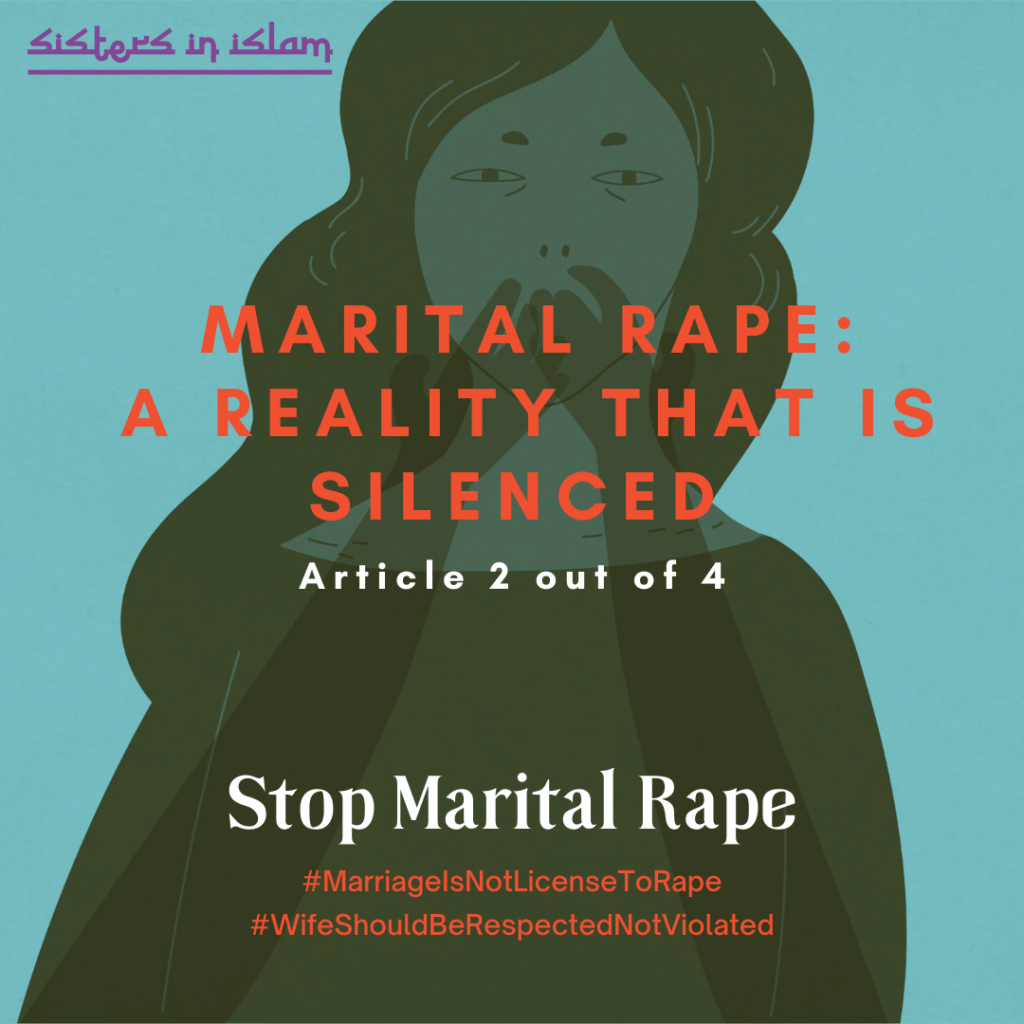 Marital Rape: A reality that is silenced

Sexual violence in marriages is a reality that happens to wives in  Malaysian society regardless of race or religion. It is not a made-up story that is deliberately sensationalized. Unfortunately, wives who experienced these traumatic episodes, their fate, their safety, and their rights as victims of sexual violence are not adequately protected nor defended by the existing law in Malaysia. Although Section 375 of the Penal Code covers the crime of rape, exceptions are made when a man has sexual intercourse with his wife in a lawful marriage under any written law at the time it is in force or recognized in the federation as lawful and is not rape. Under section 375A, the provisions only cover physical violence and/or causing physical injury by the husband in order to have sexual relations with the wife. These two sections fail to consider women’s lived realities who are pressured to have sexual intercourse with the husband who used threats to beat up or other methods of intimidation or those who are given drugs secretly or forcibly, by a husband before being raped without the wife’s consent. The exceptions found under section 375 and section 375A are insufficient to wholly cover the offense of marital rape.

The exemption of any party from punishment for rape shall not happen again just like the exemption of Muslim husband from punishment for the crime of beating or injuring his wife before the Domestic Violence Act 1994 came into force. A relationship that is legal under the law, religion or custom should not and cannot justify violence or coercion against women. It is quite disappointing, when the legislative, executive even academicians, often set aside the experiences of women in dealing with an issue or problem. Women who go through these traumatic effects have to face sexual violence and the issues discussed are not taking into account the lived realities of wives in Malaysia.

Among the statements of claims made by wives for the dissolution of marriage or divorce in the Syariah Subordinate Court from 2005-2015, involving sexual violence or rape by the husband;

“if there is a slight misunderstanding, the defendant always acts violently and hits the plaintiff. Subsequently, the violent actions of the defendant continued to the point of frightening and threatening the personal safety of the claimant.”

“…after my husband hit me, he forced me to have sex”.

“…always act violently to the point of hitting the applicant” “when there is a misunderstanding, the opponent often retaliates by forcing and having sexual intercourse to a level beyond (my) ability and causes pain/harm to the applicant’s body parts.”

“(he) only wants sexual favours and uses violence to force the Claimant to live lewdly” “..my husband (husband’s name) pushed me and I fell and lost consciousness because he was not satisfied as I did not want to sleep with him ..”

“Always arguing and violent, threatening to kill, wanting to break (my) legs and arms, when sitting at home, he swears at me by calling me an illegitimate child, pig, dajjal and whatever he feels like calling me… Abuse and forced to have sexual intercourse whenever he wants, no matter the time and even when the applicant is menstruating… the opponent’s behaviour is very irresponsible, the daily maintenance for the household is not given, he even asks for money for his own expenses from me, and if it is not given the claimant would degrade, cursed and insulted which is very painful to hear “

“…He often gets furious if I refuse to have sex with him… my husband (husband’s name) had asked for him to sleep with me that night but I disagreed and told him that I wanted to rest. After that, he continued to force me to sleep with him in anger, he approached me and banged his head against my head and slapped me on the mouth, and punched me in the eye.”

Research on Domestic Sexual Violence: Contributing Factors Based on Marital Dissolution Cases, shows that the characteristics of domestic sexual violence that occur are sodomy, being forced to have sexual intercourse while in confinement, while sick, and being coerced regardless of time, situation and place.  There are wives who are beaten before or during or after having sexual intercourse as well as other abuses, other than physical, and were thrown with harsh, obscene, or degrading words while having sexual intercourse. There are also wives who are not given sustenance but are forced to have sexual intercourse by their husbands. In the same study, researchers have concluded that there is a misunderstanding that occurs about rights and responsibilities in the household leading to the occurrence of sexual violence.

Marriage is not a license to coerce

The narrative that no rape or sexual violence can occur in a household just because “relationships between men and women is lawful after going through a valid solemnisation” is a false narrative and underestimates the lived realities of most wives in Malaysia who had to go through these situations of sexual violence.

This narrative also opens up space for husbands to exploit religion and threaten wives when the wives reject the husband’s sexual invitations due to factors such as fatigue and illness. Among the threats thrown at the wife are; ‘punishment from Allah’, ‘deserve to be in hell’ and ‘it is the husband’s right in sexual matters’. The misunderstanding in using this religious premise is due to a misunderstanding of the absolute power of a husband in a household, as well as the sexual rights and responsibilities between spouses according to Islam.

A fatwa (edict) issued by Dar Ifta ‘Al-Misriyyah (Egyptian Fatwa Board) states that a husband who uses coercion to force his wife to sleep with him will incur dosa(sin), and his wife has the right to complain to the court. According to the fatwa, women also have the right not to have sex with their husband if their husband has an illness or use violence that hurts them during sex.

Marriage is often considered a sexual contract between a man and a woman alone, so many are of the view that the wife or husband is obliged to fulfil the wishes of his partner regardless of his own circumstances and volition. The act of rape or forcing the wife to have sex in marriage is clearly against the teachings of Islam because the husband is commanded to serve the wife well and lovingly. In fact, religious teachings invite Muslims to serve their spouses with love and mutual respect.

“O believers! It is not permissible for you to inherit women against their will or mistreat them to make them return some of the dowry ˹as a ransom for divorce —unless they are found guilty of adultery. Treat them fairly. If you happen to dislike them, you may hate something which Allah turns into a great blessing”

Ma’ruf stated in the verse also means that one should not force the wife to have sexual intercourse. Sexual relations between husband and wife must be on the basis of mutual consent. Coercion in sexual relations is emotionally, mentally, and physically harmful. Thus, coercion is a major route to sexual violence. Therefore, the issue of consent and permission in sexual relations is important to understand, so as not to oppress any party in the relationship. Considering solemnisation as an absolute consent is a mistake in understanding the concept of marriage. A marriage contract is an agreement to provide protection, provide mutual benefit, and love and affection for fellow spouses. So, coercion in doing anything, including having sexual intercourse, is against the purpose of the marriage contract.

The biggest problem in dealing with sexual violence in a household is that it is protected in the name of ‘halal sex’ between husband and wife. Thus, the narrative denying the existence of marital rape would not help women who have experienced sexual violence in their marriage to get justice. Therefore, the first step to stop sexual violence against women in marriage, are for all parties to oblige to acknowledge that marital rape exists. This is important so that acts of coercion can be prevented and the victims who suffer from them are able to get justice.